The exhibits placed in the showcase form a unique collection of English silver of the 16th-17th century. Such precious pieces of virtu are not to be found even in England itself as they were melted down during the Civil War of 1642 to 1649 for coinage. A large part of the articles was purchased by merchants or brought to Russia by diplomats. Gifts received from England are traceable to the establishment of the earliest diplomatic relations between the two countries in the second half of the 16th century, as well as to the 1664 mission sent by Charles II of England, faced with the importance of reestablishing England's forfeited commercial privileges.

In 1553 the ship "Edward BonaventurĐµ" appeared at the mouth of the North Dvina River. It was commanded by Richard Chancellor, who was received in Moscow by Tsar Ivan the Terrible himself. Therefore the English-Russian diplomatic and trade relations were successfully established.

Due to the number and variety of forms of the antique English tableware, the collection is worthy of particular attention. The showcase containing English goblets, wine vessels, jugs, wine bowls and salt cellars reveal the techniques and peculiarities of the English goldsmithery. The items are characterized by delicate forms, clear ornament (a preponderance of low-relief chasing with realistic animals, fish and flowers) and high technical perfection. The tankard of 1617 is one of the nine English tankards brought from 1585 to 1663 to the Kremlin. Its lid, body and base are engraved with fantastic sea creatures in oval, rhomboid, and circular cartouches, testifying the influence of Dutch ornamentation. Elsewhere, the pomegranate seeds and roses and sweetbriar flowers on thick stems are characteristic of the English decorative art. Different types of scrolling, decorating the cartouches, and combination of a flat-chased gloss image on a matt ground are characteristic of the late Renaissance English silver. 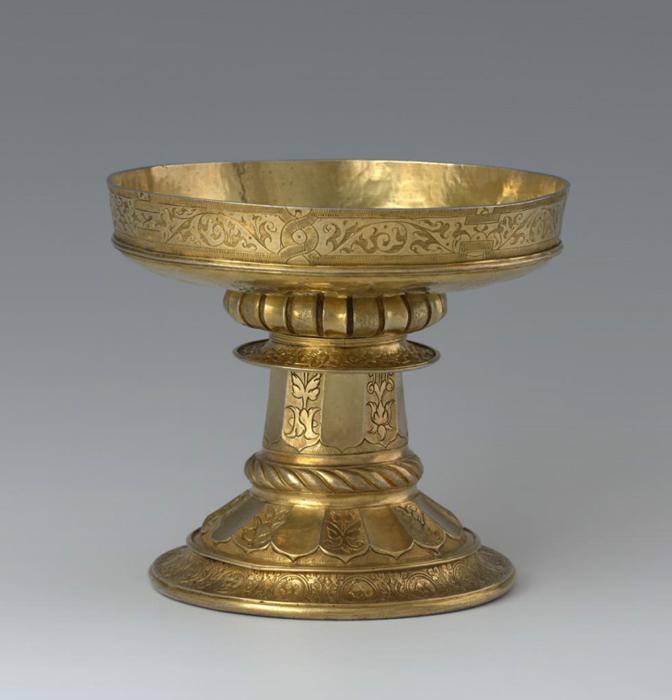