SHOWCASE 48. THE DOUBLE THRONE OF THE LATE 17TH CENTURY 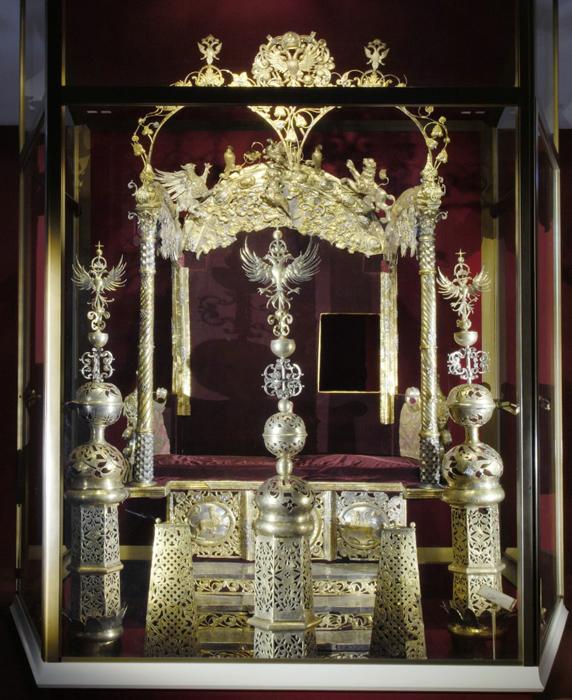 An outstanding masterpiece is presented in showcase 48—the Double Throne with three armorial pillars and two orb stands of Tsars Ivan and Peter, sons of Tsar Alexey Mikhalovich. It serves as a vivid illustration of the unique historical moment when two tsarevitchs were crowned simultaneously. Tsar Alexey died leaving three sons. After the death of the eldest one, Feodor, a fifteen-year-old Ivan should have inherited the throne, but he was feeble-minded and in poor health. So it was decided to crown the two brothers together, Ivan and a ten-year-old Peter (future Emperor Peter the Great). The double-seated throne was executed especially for the occasion by the Kremlin craftsmen in the 1680s. Its constriction including an open-work arch on twisted columns, silver steps below and a high back with two silver pillars on each side resembles elegant architectural forms. The necessary instructions and advice were transmitted through a small orifice cut into the back of the throne and concealed by velvet covering. The shape of the throne is finished with lavish ornamentation. An openwork embossment, three-dimensional animal figures, carving and high relief, contrasting combination of silver and gilt are the exemplification of the Baroque style.

┬┬┼ąš
We use cookies on our website
By continuing your visit to this site, you accept the use of cookies and other technologies to ensure the best possible use of our site and for web analytics.