SHOWCASE 51. THRONES OF THE 16TH CENTURY 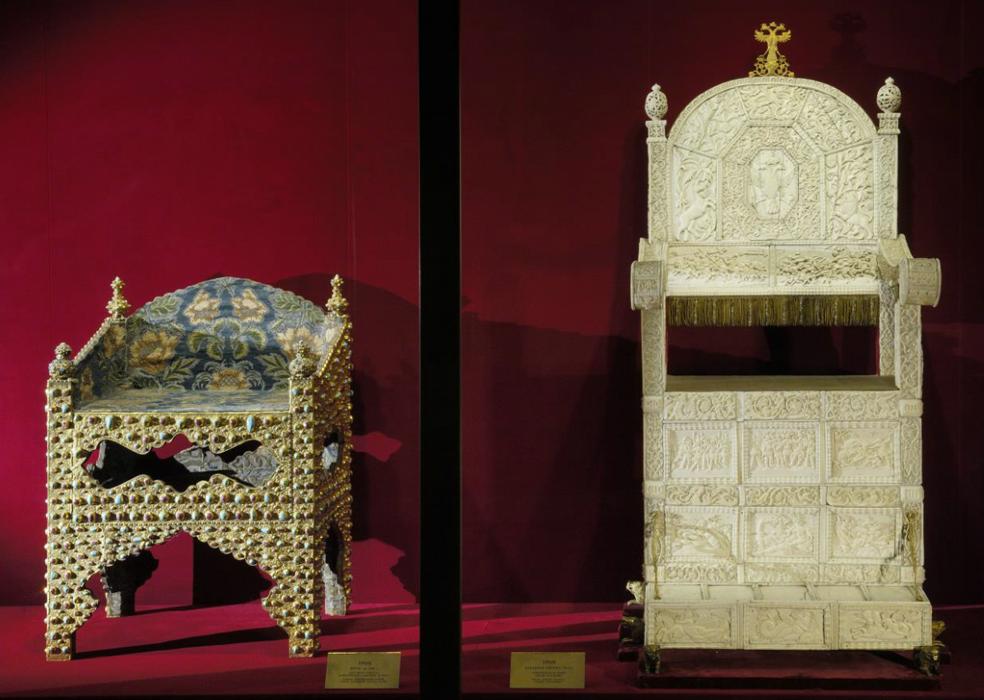 The earliest throne of the mid-16th century is represented in showcase 51. This fine specimen of Renaissance culture was made of wood faced with plates of ivory and walrus tusk; therefore, it was called "carved bone armchair". The carved ornament unites various subjects and representations into a single composition. Decorative scenes include images from both Greek mythology and the Old Testament. The depicted themes, the style of carving and the motifs, which include grotesques and Cupids, enable the researches to date most of the pieces to the 16th century and to attribute them to Western European Renaissance craftsmen. This bone throne has been renovated several times in Russia: worn pieces of bone were remade by local craftsmen; in 1856, on the occasion of the coronation of Emperor Alexander II, the throne was decorated with a silver-gilt double-headed eagle.

In addition to the bone chair, the showcase includes a throne of oriental workmanship executed in the late 16th century. Having been presented by Shah Abbas I to Tsar Boris Godunov, it was called "Persian throne with stones". The form of the throne with its low back flowing into sloping arm-rests reveals features typical of Iranian furniture of the 16th-17th centuries. The makers have used ornament beloved in the East, i.e. strips of gold decorated with a foliate pattern and coloured stones - blue turquoises, red rubies and tourmalines. The back of the seat, the arms and the whole lower section of the throne were covered with gold Persian fabric, replaced by French velvet in 1742 for the coronation of Empress Elizabeth.